Find Out What Makes Our Company #Remarkable

We help our clients sell and buy providing a world class marketing strategy and negotiation skills, we've gained through 100's of transactions.

We respect your inbox. We only send interesting and relevant emails. 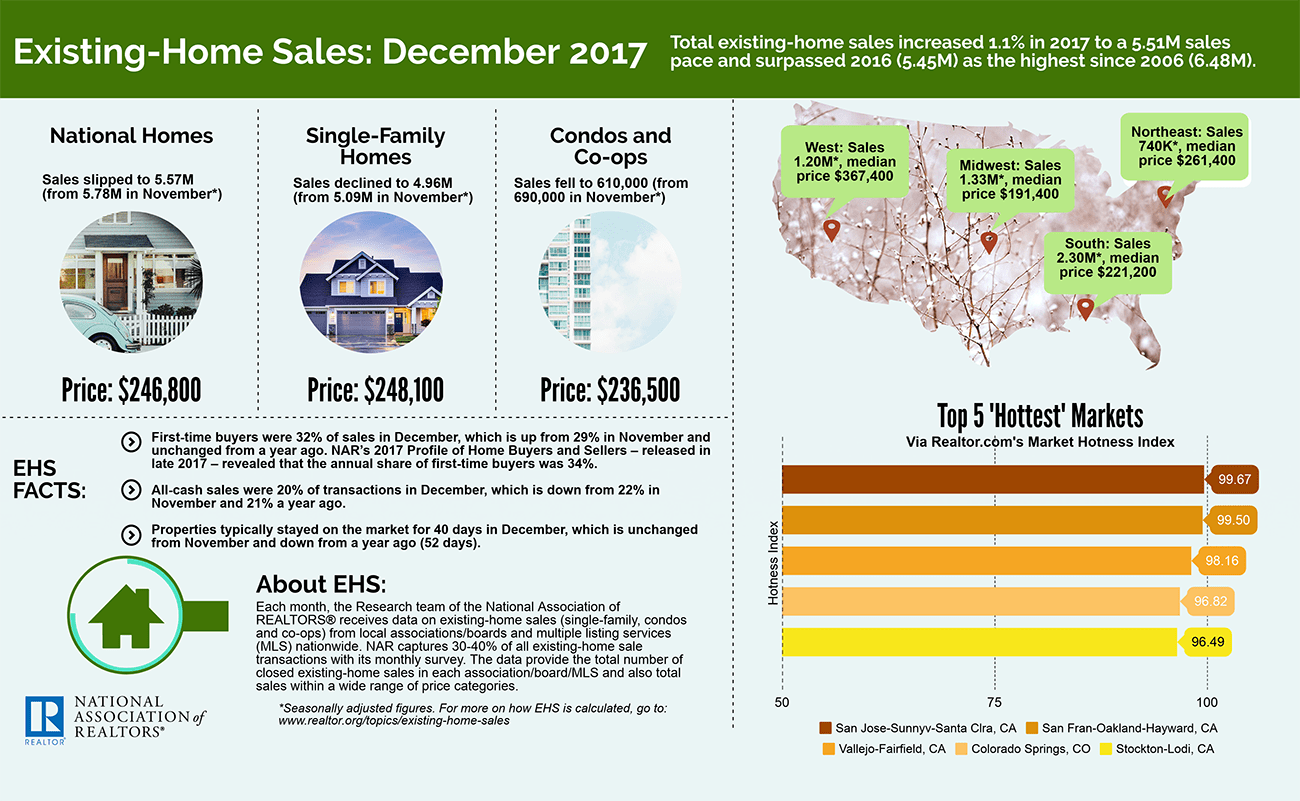 WASHINGTON (January 24, 2018) — Existing-home sales subsided in most of the country in December, but 2017 as a whole edged up 1.1 percent and ended up being the best year for sales in 11 years, according to the National Association of Realtors®.

Total existing-home sales1,  https://www.nar.realtor/existing-home-sales, which are completed transactions that include single-family homes, townhomes, condominiums and co-ops, increased 1.1 percent in 2017 to a 5.51 million sales pace and surpassed 2016 (5.45 million) as the highest since 2006 (6.48 million).

In December, existing-home sales slipped 3.6 percent to a seasonally adjusted annual rate of 5.57 million from a downwardly revised 5.78 million in November. After last month’s decline, sales are still 1.1 percent above a year ago.

Lawrence Yun, NAR chief economist, says the housing market performed remarkably well for the U.S. economy in 2017, with substantial wealth gains for homeowners and historically low distressed property sales. “Existing sales concluded the year on a softer note, but they were guided higher these last 12 months by a multi-year streak of exceptional job growth, which ignited buyer demand,” said Yun. “At the same time, market conditions were far from perfect. New listings struggled to keep up with what was sold very quickly, and buying became less affordable in a large swath of the country. These two factors ultimately muted what should have been a stronger sales pace.”

Added Yun, “Closings scaled back in most areas last month for this same reason. Affordability pressures persisted, and the pool of interested buyers at the end of the year significantly outweighed what was available for sale.”

Total housing inventory3 at the end of December dropped 11.4 percent to 1.48 million existing homes available for sale, and is now 10.3 percent lower than a year ago (1.65 million) and has fallen year-over-year for 31 consecutive months. Unsold inventory is at a 3.2-month supply at the current sales pace, which is down from 3.6 months a year ago and is the lowest level since NAR began tracking in 1999.

“The lack of supply over the past year has been eye-opening and is why, even with strong job creation pushing wages higher, home price gains – at 5.8 percent nationally in 2017 – doubled the pace of income growth and were even swifter in several markets,” said Yun.

First-time buyers were 32 percent of sales in December, which is up from 29 percent in November and unchanged from a year ago. NAR’s 2017 Profile of Home Buyers and Sellers –  released in late 20174     – revealed that the annual share of first-time buyers was 34 percent.

“Rising wages and the expanding economy should lay the foundation for 2018 being the turning point towards an uptick in sales to first-time buyers,” said Yun. “However, if inventory conditions fail to improve, higher mortgage rates and prices will further eat into affordability and prevent many renters from becoming homeowners.”

NAR President Elizabeth Mendenhall, a sixth-generation Realtor® from Columbia, Missouri and CEO of RE/MAX Boone Realty, says improving the new tax law is a top priority for Realtors® in 2018. “Especially in high-cost, high-taxed markets, there’s still big concern that the overall structure of the final bill diminishes the tax benefits of homeownership in a way that would adversely affect home values and sales over time,” she said. “As the housing market adjusts to the new law, Realtors® will be listening to their clients and communicating to lawmakers ways to ensure owning a home is truly incentivized in the tax code.”

Existing-home sales in the South decreased 1.7 percent to an annual rate of 2.30 million in December, but are still 3.1 percent higher than a year ago. The median price in the South was $221,200, up 5.8 percent from a year ago.

The National Association of Realtors®, “The Voice for Real Estate,” is America’s largest trade association, representing 1.3 million members involved in all aspects of the residential and commercial real estate industries.

We'd love to answer them!

Find Out What Makes Our Company #Remarkable

We help our clients sell and buy providing a world class marketing strategy and negotiation skills, we've gained through 100's of transactions.

We respect your inbox. We only send interesting and relevant emails.

We use cookies to enhance your browsing experience and deliver our services. By continuing to visit this site, you agree to our use of cookies. More info